Hunted by the Others by Jess Haines Review 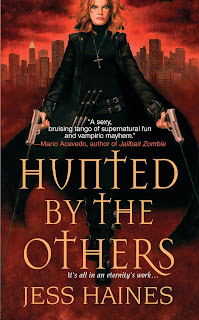 Here is the description of Hunted by the Others that was on Jess Haines website.


They are the Others—the vampires, mages, and werewolves once thought to exist only in our imaginations. Now they’re stepping out of the shadows, and nothing in our world will ever be the same again…
In a Town Like This, Being A P.I. Can Be Murder
Shiarra Waynest’s detective work was dangerous enough when her client base was strictly mortal. But ailing finances have forced her to accept a lucrative case that could save her firm—if it doesn’t kill her first. Shiarra has signed on to work for a high-level mage to recover an ancient artifact owned by one of New York’s most powerful vampires.
As soon as Shiarra meets sexy, mesmerizing vamp Alec Royce, she knows her assignment is even more complicated than she thought. With a clandestine anti-Other group trying to recruit her, and magi being eliminated, Shiarra needs back-up and enlists her ex-boyfriend—a werewolf whose non-furry form is disarmingly appealing—and a nerdy mage with surprising talents. But it may not be enough. In a city where the undead roam, magic rules, and even the Others aren’t always what they seem, Shiarra has just become the secret weapon in a battle between good and evil—whether she likes it or not…"
~My take on the book~ MAY INCLUDE SPOILERS
I really enjoyed this book. Shiarra is a strong willed and determined Woman who is put in a rough situation. She has many difficult choices to make while trying to keep herself and friends/family safe. Also her partner in crime Sara. It was interesting to see how the "Others" were accepted in society and how the laws worked for their interaction with Humans. Shiarra tries her best to stay away from anything not mortal but ends up finding out her boyfriend is a Were. She breaks it off with him immediately and a little hasty. Later running into him at her parents house! What an awkward situation that would be. Arnold is a Mage that Shiarra meets early in the book and He sticks by her side to help protect Shiarra from the danger she gets herself into. He's a great Character. Comes off as nerd but that soon changes. Royce is the big, bad, Sexy Vampire that owns most of
New York. That part of the story really takes you on some twists and turns. Of course there are also societies that hate the Others and have formed groups like The White Hats. They want Shiarra to join them so bad. I can't wait to read book two in the H & W Investigations Series, Taken by the Others.  Deceived by the Others is book 3 and Stalking the Others is book 4. I highly recommend everyone pick up this book, lots of twists and turns to keep you guessing. 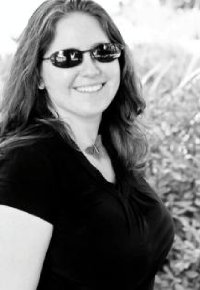 Jess Haines is an amazing Author! I can't wait to meet her at Author After Dark 2012!
Here's the link to her webpage  http://www.jesshaines.com/home__about_the_author
Posted by bluesun1218 at 9:08 PM