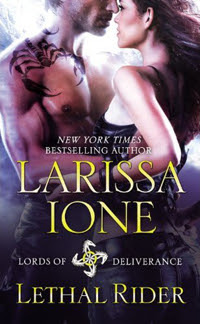 Blurp from Goodreads:
They're here. They ride. The Four Horsemen of the Apocalypse.

Born of a match between good and evil, four siblings stand between hell's minions and everything they want to destroy. They are the Lords of Deliverance, and they have the power to ward off Doomsday...or let it ride...
Thanatos, the most deadly Horseman of the Apocalypse, has endured thousands of years of celibacy to prevent the end of days. But just one night with the wickedly sexy Aegis Guardian, Regan Cooper, shatters centuries of resolve. Yet their passion comes with a price. And Thanatos must face a truth more terrifying than an apocalypse-he's about to become a father.
Demon-slayer Regan never imagined herself the maternal type, but with the fate of the world hanging in the balance she had no choice but to seduce Thanatos and bear his child. Now, as the final battle draws closer and his rage at being betrayed is overshadowed by an undeniable passion for the mother of his child, Thanatos has a life-shattering realization: To save the world, he must sacrifice the only thing he's ever wanted-a family.

*Review*
Every time Larissa has a new release I always have it on pre order and if it doesn't come in the mail on release day it starts to drive me crazy. I usually end up going to the closest store and grabbing a copy. It just kills me knowing I could be reading rather than waiting for the Postman! Larissa Ione is one of my all time favorite Authors, her writing just sucks me out of my day to day life and plops me into a world full of excitement and hunky warriors.
Than has always been very intriguing to me and I was very excited for his book. I was not disappointing! Lethal Rider takes off right where Immortal Rider left off.

Thanatos, keeper of Death, has been under the spell of hellhound saliva for 8 months and during that time he has been thinking about Regan, anger for the way things turned out and lusting after the Women who took his Virginity. When he starts to realize that the Venom is wearing off and that he can get his freedom back all he can think about is getting to Regan.  He's just not sure if he's going to kill her or fuck her.
Regan has been living at Aegis's Headquarters during her pregnancy and dealing with a recurring dream of her own death. She is certain it will come to pass by Thanatos hand. She awakens one morning after having that dream and tries to assure herself that she's safe, no one is going to get to her in the Aegis Headquarters but the unexpected happens and it turns Regan's world upside down.

I'm trying really hard to keep this review spoiler free, So much happens in this book and don't be surprised if your read through it in one day. Yeah, it's that good!
Favorite Quotes:
"I would give up everything, my very soul, to have just one Human lifetime with a mate and children." 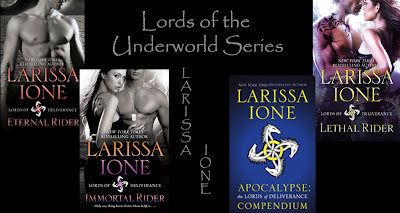 Order your copy now, Release day is May 22th!