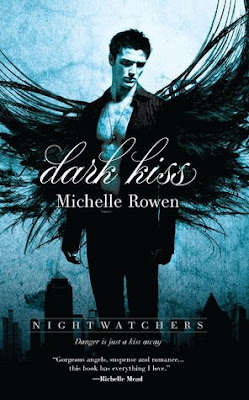 "Something Wicked this way comes."
Blurp from Goodreads;
I don't do dangerous.  Smart, über-careful, ordinary Samantha-that's me. But I just couldn't pass up a surprise kiss from my number-one unattainable crush. A kiss that did something to me...something strange. Now I feel hungry all the time, but not for food. It's like part of me is missing-and I don't know if I can get it back. Then there's Bishop. At first I thought he was just a street kid, but the secrets he's keeping are as intense as his unearthly blue eyes. If he's what I think he is, he may be the only one who can help me. But something terrifying is closing in, and the one chance Bishop and I have to stop it means losing everything I ever wanted and embracing the darkness inside me.... NIGHTWATCHERS When angels and demons must work together, something beyond evil is rising...

*Spoiler free*
Samantha and Carly are at their usually hang called Crave, an all age club, when Samantha's crush, Stephen, approaches her. Samantha finds herself following him to the upstairs lounge curious why he wanted to speak with her. Once upstairs she's confused because Stephen is calling her "special" and saying "She" wants me to do this and that he thought she was to young but once Stephen was close enough to touch Samantha all her reasoning went out the window because Stephen wanted to kiss her.
"I should warn you, it's a very dangerous kiss. It'll change your life forever, so you have to want it."
Thinking he's coming off cocky Sam takes the initiative and pulls his mouth to hers. She thinks she's experiencing a fantastic kiss with a boy who truly likes her until the kiss is over and Stephen just walks away.


It's not long after she meets Bishop,  that she feels a pull toward him that she can't explain but what he's talking about doesn't make sense. Angels, Demons and....Greys??


This was a good YA book, the idea of a life altering kiss is a great idea. Samantha is a strong determined character that isn't afraid to face what comes her way. She's loyal to her Best Friend Carly and tries her best to keep her out of this new world she was thrown into. Bishop is one hot Angel but later in the book you meet Kraven, he's a Demon, and I can't help but find myself drawn to him. Maybe we'll have more of his story in book two, which comes out in 2013 called Wicked Kiss! I think if you've read Lauren Kate's Fallen series or Hush Hush series by Becca Fitzpatrick your going to love this new series!