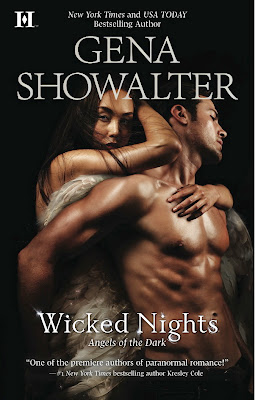 Leader of the most powerful army in the heavens,
Zacharel has been deemed nearly too dangerous, too ruthless-
and if he isn't careful, he'll lose his wings.
But this warrior with a heart of ice will not be deterred from his missions,
at any cost...
until a vulnerable human tempts him with a carnal pleasure
he's never known before.

Accused of a crime she did not commit, Annabelle Miller has spent four years in an institution for the criminally insane. Demons track her every move, and their king will stop at nothing to have her. Zacharel is her only hope for survival, but is the brutal angel with a touch as hot as hell her salvation-or her ultimate damnation?

First off I must say this cover is absolutely swoon worthy and I had to have it in paperback rather than Ebook to fully appreciate it. :)
Wicked Nights is the first book in the new series Angels of the Dark which is a spin off from The Lords of the Underworld series. I was so excited for Zacharel to get his own story because of the brief encounters we got in the LOD series, such a serious Warrior that was fully dedicated to his missions and was about emotional as a rock. In Wicked Nights Zacharel has been given an Angelic Army of "bad boys", these are Angels that have pushed the limits so far with their behaviors and acts against Humans that they are severely close to losing their wings. Zacharel is in charge of teaching them respect and that Humans are not to be harmed no matter how they might get in the way during war and to follow orders, something Zacharel has yet to learn himself. The hitch, whenever one of them kill a Human Zacharel takes the punishment.
Annabelle has been living in a institution for the Criminally Insane for the last 4 years, she was convicted of brutally murdering her parents  and no one believes that she's innocent or that a monster is to blame. To make matters worse ever since that monster killed her parents she now sees Monsters everywhere and they're always out for blood.
With Zacharel on a mission to destroy the Demons and Annabelle trying to protect herself from the monster in the institution their worlds are bound to collide.

Gena Showalter never fails to amaze me with the worlds that she weaves, the characters that pull our heart strings and the action that keeps us up to the wee hours in the morning. The way the plot thicken towards the end and the obstacles thrown in front of the characters will take you by surprise. The amount of depth each character posses tells me the rest of this series is going to be phenomenal and I'm really looking forward to the next book in this series called  Beauty Awakened, it will be one of  Zacharel's warriors story named Koldo. 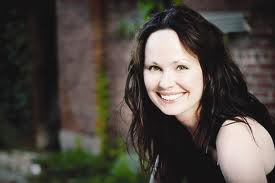 Find more about Gena Showalter and her books here: 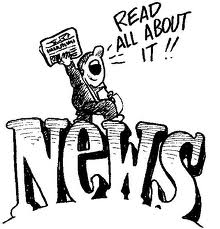 Gena Showalter will be making an appearance on After Dark on July 5th!! I am planning a FAN Q/A, if you have a question your dying to ask Gena now's your chance! Only 10 questions will be picked and if your question is answered I will send you some Wicked Nights Bookmarks!
Just click the tab in the right side bar.
Posted by bluesun1218 at 7:03 AM