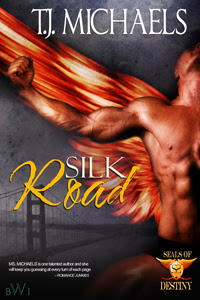 The first Descendant in millennia with the power to use an ancient artifact is being hunted. By the good, the bad…and the worst.
Every rogue longs for a second chance, right? Wrong. Larien, former angel of The Host is not looking for redemption. What he needs hasn’t been seen in millennia but he’ll search the ends of the Earth to find it – from the hills of San Francisco all the way to…the Silk Road.
Jayla Protegenu learned as a child to call her protectors to keep at bay the things that prowled the night. Now, as a woman grown, she never expected one of those protectors would be a Fallen angel – Larien. His job: to help Jayla find the mythical and mystical Seal of Solomon.
Even among those who created the very meaning of good and evil, nothing is black and white. Neither friends nor enemies are what they appear.


Excerpt
Like the idiot he’d shown himself to be just within the last few minutes, Jabon opened his mouth with a snarl. “You dare touch me?” He rose and charged Luc only to slam into a wall that wasn’t there.
“This is my domain, Jabon. My Court.”
“You do not rule me. I’m a demon. Abaddon has—”
“Correction, bitch, you’re a Fallen demon, and therein lies the difference. Abaddon doesn’t own your ass. I do.”
Jabon’s expensive gray silk shirt ripped away from his body of its own accord. The sound of tearing fabric was lost beneath Jabon’s screams as another grim wave slammed into him. The silent observer felt no heat and the temperature in the room remained quite comfortable, yet Jabon’s flesh blistered and singed as if someone held an old-fashioned pitch torch to it.
“You never did understand hierarchy, Jabon. And shut up already.” Luc sounded absolutely bored as yet another blast hit Jabon. Suddenly the screaming stopped.
“Abaddon keeps order in She’ol. May even call you once in a while to Aegypto. But your leash is, and has always been, mine to pull from the second you submitted to me and went from Fallen to Fallen demon, Jabon.”
Jabon gagged, pleaded with his eyes. But he was just a little too late to appeal to Luc’s gracious side. The former Archangel was pissed. In fact, as the bystander watched the two former eudaemon, he thought back to when Luc was still the Son of the Morning. He had been created as a force to be reckoned with. Even in his diminished state, he always would be hell on wheels. It was simply a matter of displacement. While Luc had stood by the side of the creative Source, he’d been top dog in beauty, strength and skill. Today he might not have any place within the Host, but he was still powerful.
The observer stood off to the side of the room and quietly watched Luc sit back down in one of the many comfy chairs provided for guests. He extended a single finger, twirled it in the air and the skin from Jabon’s torso came away from Jabon’s body in long elastic-like strips. The Fallen demon’s mouth was open in silent agony as the blood pooled thick at his feet. Luc had been right—Jabon had never understood hierarchy.
The observer remained silent, careful not to shake his head in pity or curl his lip in disgust. It was a fucking shame, really. The only thing that kept others from taking Luc’s top-dog status…was knowledge. What Jabon didn’t understand was that no matter how much shit Luc talked, even a human could wipe the floor with him. And Luc knew it. But he sure wasn’t about to give anyone the details of that particular secret.
If a Fallen demon found the will or way to talk an uninitiated Descendant into exercising their authority over Luc…well, one could imagine how Luc would take that bit of comeuppance. Why? Because Luc had power. Had it in scads. But only over those that freely gave themselves to him—whether by choice or sheer ignorance made no difference.
Luc finally released the grip on Jabon’s vocal chords and the Fallen demon’s vibrato soprano notes rang through the room and ended on an oomph as he collapsed to the floor.
“And you’d better be healed in enough time to find that fucking human Descendant and bring her to me. When I tell you where Chel is, you’d better be ready or I’ll peel your hide again. Only next time it’ll be your dick that gets stripped. Understand me, underling?”