Kissed by a Vampire Blog Tour with Caridad Piñeiro 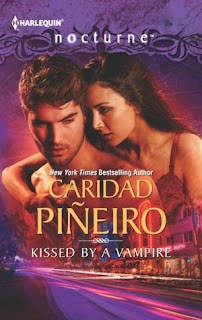 Kissed by a Vampire by Caridad Pineiro
October 16, 2012
Harlequin Nocturne
A vampire who has given up on love gets a second chance from a most unlikely mortal…
For two thousand years, vampire elder Stacia has roamed on her own, haunted by the betrayal that turned her into a creature of the night. Her nights looming empty and eternal, Stacia longs for love, but settles for quick bites and sinful pleasures in South Beach. Until she comes face-to-face with the unforgettable DEA agent she once brought back from the brink of death.
Alex Garcia knows that demons exist-the real kind, the kind that are kidnapping women and selling them into slavery. Finding those victims is his focus-not a beautiful seductress whose otherworldly abilities can’t possibly be real. But when Stacia summons all her powers to prove what she really is, Alex will summon all his to believe in the vampire’s kiss….
Order: Amazon / B&N

* Do you have any rituals you do before you sit down to write?
I always get a big cup of coffee, extra light and extra sweet.  Then I turn on the television, plop onto the sofa, slip under my comforter and get to work.

Reading reviews is both exciting and torture.  It’s nice to see what people like, but difficult when a story disappoints someone.  But bad reviews can be good in that it makes you consider a different opinion of your story.  I try to see if can take anything away from a bad (or good) review that will help me write a better story in the future.

* Do you have a crazy fan story?
I really don’t.  I’ve been really lucky to meet so many of them and they’ve all been so kind and generous and lovely.

*Biggest pet peeve?
People who are late.  I think it’s disrespectful to the person who is left waiting.

*Are you attending any Conventions in the coming year?
I’ll be at the Olde City, New Blood in February, the Liberty States Fiction Writers in March, RT Book Lovers Convention and possibly the RWA National Conference.

*What are you working on now?
I am finishing up BORN TO LOVE, the second book in the revamped (Big Pun intended) THE CALLING/REBORN vampire series.  The first book in the new series, BORN TO SERVE, is the start of a new version of the series featuring FBI Agent Diana Reyes and old Southern vampire Ryder Latimer.  It’ll be out in February 2013.

*Do you ever get inspiration for a character from people you meet?
I’ve gotten inspiration for names from people.  Ryder was named after a waiter who served us a wonderful anniversary dinner.  I just met someone named Shea and I’m loving the idea of a hero with that name.  I’ve also named characters after family and friends, which is always fun.

*Out of your books do you have a favorite character or one that was really easy for you to write?
FBI Agent Diana Reyes has to be one of my favorites, I guess because she’s doing something I really always wanted to do.  Plus, I can understand some of her insecurities as well as confidence because they mirror mine in some ways.

*What genre of books do you prefer to read in your down time?
I love reading romantic suspense in my down time.

* I know some of us here at All the Fun Starts After Dark are guilty of this so I gotta ask, Have you ever bought a book because of its cover?
Of course.  There are some covers that just snare your attention and make it tough not to pick up the book.

Thanks so much to Caridad for taking the time out of her schedule to be here today! If you want more don't forget to stop at the other blog stops on the Kissed by a Vampire tour, links are below.

Caridad will be giving away a paperback of THE CLAIMED along with some SWAG.
Contest is open to international readers as well. 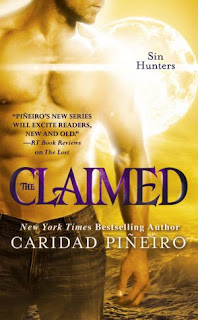 Victoria Johnson loves her life. She's her own boss in a quaint beachside town, and has great friends who keep her grounded. If only they knew who she really is: an heiress to an ancient race who possesses astonishing superhuman powers. It's Victoria's duty to restore her clan of Light Hunters to their former glory by choosing the perfect mate. In Christopher Sombrosa, she just may have found him. Strong, smart, and successful, Christopher exudes a powerful energy. Their connection is sensual, irresistible-and forbidden.