Review: Something Darker by S.A. Price 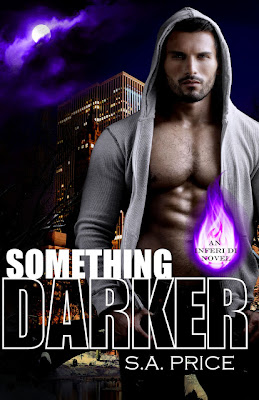 book one of the Inferii Dii
The one thing Syrus Alcot, the God of Death Osiris in the Egyptian Pantheon, wants in all the worlds is the woman he loved and lost returned to him. When he gave up his powers, and freedom for a life of service he was promised her return. That was over one thousand years ago. A member of a team of dark gods charged with keeping humanity safe, he leads a loveless existence in New York City, searching for the one thing that could bring his wife back to him, a lapis scarab that was lost to him ages before.

Gwen Stapleton, a mild mannered librarian, is unaware that she holds the key to not only Syrus’ happiness, but her own. Seemingly stuck in a hopeless relationship with a man she doesn’t love, she has no idea that a chance meeting in Alphabet City will start a landslide to her heart’s content. Because Gwen is the keeper of the scarab, and is everything Syrus has ever wanted… and hes not the only one.

An Ancient evil is waking, and its servants will stop at nothing to see it seize its rightful place as the new pantheon of earth. And in order for Syrus and his team to save the world, Gwen is going to have to accept him, and show that love does make all the difference.

What else can I say! S.A. Price has warmed up these cold nights with a stunning group of male gods. Book one in the Inferi Dii series starts off with Syrus, immortal god of Death or also known as the Egyptian God Osiris. They gave up their lives to protect the world, as well as their powers. Each God has a Relic which hold their power and each Relic has a Keeper. This Keeper is the vessel for the stored powers and when a God find his Keeper he shall have his powers back and a partner to spend the rest of eternity with.  Their group being called the Inferi Dii. Their enemy, demons called Div are causing a lot of problems. They are the servants of the VeIns and at one time was meant to rule but instead were bound to another dimension. So the war between the VeIn and Inferi Dii has been an ongoing battle but has really picked up lately and the Inferi Dii aren't completely sure why.
If you love Mythology or are new to it this is a fantastic book for you!
Syrus is keeping watch over a seedy neighborhood when he comes up on some Div's following two women that had just left a club. The knight in shining armor that he is does his duties to protect and in turn meets a woman that he feels a deep conection with right off the bat.
Gwen is your run of the mill Librarian that doesn't see herself as beautiful or deserving of a good man. In a relationship she has just settled for even though her best friend tells her she deserves more. While out with her best friend Ansley she has a run in with two men and is saved by a gorgeous man that doesn't take no for an answer when getting home safely. Little does she know that this man, Syrus, finds her very attractive and is willing to do anything to keep her safe.
Gwen is having to redefine herself, find how she fits into the new world she is thrust in and trust people whom she hardly knows.
I had an immediate connection with Gwen and Syrus. How Gwen settles for what she has instead of going after what she wants and how Syrus is lonely and hopes to find the one person he is meant to be with. It really helped me to see great things can happen when you least expect it. I love how the two main characters Syrus and Gwen's relationship grows and that two people that were both in lonely situations find happiness against the odds. I can not wait for book in this series to be available and I highly recommend getting a copy!!

Grab your copy in ebook HERE and Paperback HERE

You can meet the Authors At Authors After Dark this year in Savannah! They are also having a fantastic CONTEST for people that buy the book, so head over you don't want to miss this!