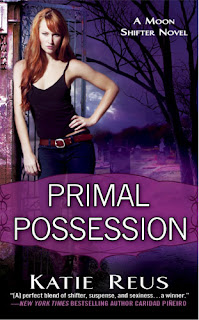 Primal Possession is book 2 in Katie Rues' A Moon Shifter Novel and the release day is September 4th 2012.
Book Description;
To protect her, he will unleash the beast within…
As his pack’s second-in-command, lupine shifter Liam Armstrong gives orders and takes what he wants—until he meets red-headed, blue-eyed December McIntyre. Liam knows the human beauty is his intended mate the moment he sees her, but December is far too strong-willed to accept his protection.
December, whose brother is the town sheriff, has every reason to mistrust shifters after one killed her youngest sibling. But the forceful and handsome Liam has gotten under her skin in a way she hadn’t thought possible, and the desire she feels for him is almost too much to bear.
When a radical hate group targets all humans known to sympathize with paranormal beings, December is attacked in her bookstore. Reluctantly, she turns to the only one who can help her: Liam. And he is going to take her to places within herself she never knew existed.

You can get a signed copy at her virtual signing going on now until August 1st or until 300 copies are sold.  It is international as well and there only $7.99!
Just click link below and it will take you were you want to go!

http://www.myauthorbiz.com/mab/vs/mod_detail.php?author=katiereus.com
Posted by bluesun1218 at 7:50 AM