Hanna Martine left a decade of office work in order to show her daughter what it meant to go after one's dream. She loves bar stools, books, travel and her friends. Though she and her family live outside Chicago, her heart resides in Australia. 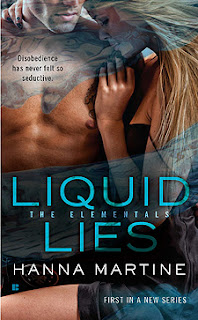 power that will globally expand the profitable family business. As dutiful future leader of her race of water elementals, she'll do anything to protect her people's secrets and bloodlines—including enter an arranged marriage. Inside, however, she yearns for forbidden human men.
Reed is a mercenary addicted to the money and adrenaline rush of his work. After he inadvertently saves Gwen's life, he ignites her taboo desire for men without magic—and with bodies of gods. Just as things heat up, Reed discovers that Gwen is exactly who he's been hired to kidnap. He resolves to put work before lust, yet her luscious beauty and fiery spirit unravel him...
But there is a terrible truth behind Gwen's family business—and now, caught between the kinsmen she no longer trusts and an enemy bent on vengeance, the only ally she has is her abductor...

BOOK 2 IN THE ELEMENTAL SERIES 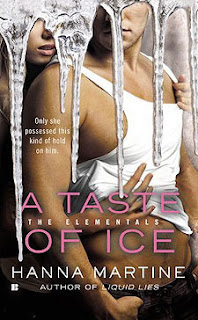 There is an untapped world of magic
that any man would covet...
Five years ago, Xavier escaped from the Ofarian Plant. Today he calls a Colorado mountain town home. It's there he buries himself in his work, swearing off magic and relationships—until a woman threatens every promise he's made to himself.
Cat has always known she is different. Water speaks to her on an uncanny level, and she channels this gift into beautiful painted waterscapes. Now, a gallery is debuting her work in Colorado—and it'll reveal far more about her than she imagined.
The spark between Cat and Xavier is enough to throw both of them off balance. Every tantalizing moment sends them dangerously close to a rising flood of desire. Dangerous because Xavier comes to suspect that Cat is an Ofarian—his people's enemy. But they're both about to discover a far greater, more malicious power at play...


BOOK 1.5 IN THE ELEMENTAL SERIES
Desire is released in these original stories by four masters of paranormal romance. 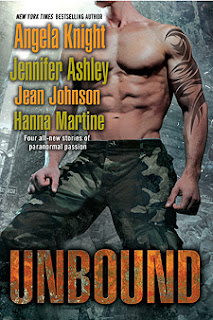 *  Do you have any rituals you do before you sit down to write?

I have found that the more books I publish, the thinner I am stretched in terms of time able to be devoted to actual writing. I can choose to either let myself get distracted by promotion or other such things, OR to focus my attention on my craft, and on writing the best possible story for my readers. It's very easy to believe that the outside stuff is more important, but really it all comes down to story. Unfortunately, I have let myself get derailed more often than not.

In the past few months I've taken to going through some deep breathing exercises before writing in order to expel a lot of the outside world. It works!

I do not seek out reviews at all. While I love Goodreads and maintain an author presence there, I skim past any of my own reviews. I just do not do well in reading them. I love love love that people are reading and talking about my books (whether good or bad), but I prefer to leave it at that.

However, sometimes bloggers have directly contacted me to inform me of a positive review on their blog. I will admit that I have read those in order to see if there is a quote I can use on my website.

Not a crazy fan story, but a cool fan story! My first book, LIQUID LIES, had been out less than a month. I was signing at RWA last year and a reader stopped right in front of my table, wide-eyed and completely still. Finally she broke into this huge grin and squealed, "Oh my god! You're here! Can I take a picture with you!"

After dreaming of a moment like that since I was nine, and after going through so much rejection and pre-publishing turmoil, it was such an incredible moment.

*Are you attending any Conventions in the coming year?

As I write this, I am at the RT Booklovers Convention in Kansas City! I am also appearing at the Cleveland Rocks Romance Writers Conference May 17-18, the Romance Writers of America conference July 17-20 .... aaaaaaand Authors After Dark Savannah Aug 15-18!

I am really really excited about being a Featured Author at AADSAV. I love to meet readers and to expose my fiction to a whole new group of eyes. I'm also a reader myself, so I'm stoked to meet several other authors who will be there. Plus, I have been known to have a drink or two (or three or four) in a social situation, so Authors After Dark seems to be the perfect storm of things I love. Can't wait!

*What are you working on now?

I am writing the third book in my Elementals paranormal romance series. Titled DROWNING IN FIRE, it's about the tempestuous, adventurous relationship between a fire and water elemental, and it will come out in 2014. I'm loving writing it.

*Do you ever get inspiration for a character from people you meet?

Sure, all the time. Never complete characters, but I have been inspired by a single trait, a catchprase or quirk, or a little piece of a person's history. The characters usually evolve from there.

*Out of your books do you have a favorite character or one that was really easy for you to write?

Michael, the villain from A TASTE OF ICE, moved very easily from my head to my fingertips. I'm not sure what that says about me, that it was the Big Bad who gave me the least amount of problems and who I enjoyed writing the most!

I am rooted very deeply in epic fantasy. I read a lot more romance now to keep up on my genre, but when I can, I crack open one of those giant hardback tomes filled with massive casts of characters, maps on the inside covers, and intricate political plotting. Right now I am reading TIGANA by Guy Gavriel Kay and I'm sort of blown away by it.

*  I know some of us here at All the Fun Starts After Dark are guilty of this so I gotta ask, Have you ever bought a book because of its cover?

Thank you so much for having me! What terrific interview questions!

Hanna is offering to one lucky person a E-copy of one of the books from her Elemental Series. All you have to do is be a blog follower and leave a comment! Winner will be announced May 10th. LEAVE EMAIL ADDRESS IN YOUR COMMENT! Good Luck!