Review of Reckoning by Jeaniene Frost 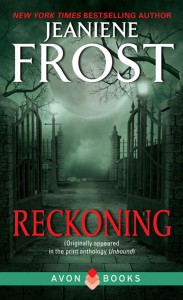 Ebook Only!
Brief description from Jeaniene Frost site;
"In New Orleans, a pair of undead serial killers are about to turn Mardi Gras into a horror show—unless the immortal hit man Bones can hunt them down first. From Jeaniene Frost comes a thrilling prequel novella featuring characters from her New York Times bestselling Night Huntress series. Originally appeared in the anthology Unbound."

I love anything with The Night Huntress Series Characters. This was a great short story about Bones fighting  mysterious serial killers while he himself is being hunted.  It all takes place right in the Heart of New Orleans with a lot of action! Voodoo Queen Marie and her side kick the Ghoul Jelani make an appearance as well but it probably won't go the way you might assume.  I recommend reading this if your a big fan of Bones like I am, It just gives you a little fix to hold you over until the next Night Huntress book releases.