Did you know that this book was originally published in 2003 under the
name Deborah Raleigh?

My Lord Vampire is book 1 in the Immortal Rogue Series and is a Historical Vampire Romance that takes places in London. Gideon has lived behind the Veil for nearly 200 years but he has been asked to go to the Mortal world where he will protect an ancient medallion and a Mortal Women who is the keeper of this Medallion. Once entering back into the Mortal world he battles with lust and desires he hasn't felt in a very long time. He meets the Lady he is to protect one evening at a party, her name is Simone. Simone is a high society widow who is sought after by many eligible bachelors. She think Gideon is just another one of those Bachelors that is crashing her party. She confronts him and finds out he is more than just crashing her party he is there to protect her from some unknown source, she thinks Gideon is mental. They both have to learn to trust one another but will there secrets keep them from that?
I really enjoyed this book, the sexual tension between Simone and Gideon can be cut with a knife and I was wondering who would cave into their lust first. This a perfect example of good vs. evil and I was happy with who prevailed. This is definitely another fantastic read by Alexandra Ivy.

Book Description from Goodreads;
Centuries have passed since Gideon Ravel dwelled among humans. Now he must infiltrate the cream of London society to earn the trust of one woman. Simone, Lady Gilbert, possesses an amulet of unimaginable power, and no concept of the threat that surrounds her. The ton's gossip prepared him for her beauty and wit. But he is blindsided by her barely disguised sensuality and his growing need to possess her. . .

None of the idle aristocrats who vie for Simone's attentions know about her past. To them, she is the sophisticated, worldly widow known as the "Wicked Temptress." The truth would ruin her, and she has never been tempted to reveal it until now. Yet beneath Gideon's bold, black-eyed stare is a hunger that demands satisfaction and complete surrender. . .and a secret far more dangerous than her own.

Haven't read it yet? Try your luck to win a copy here on the blog! Giveaway includes a paperback copy of My Lord Vampire, signed bookplate and swag, goodluck! 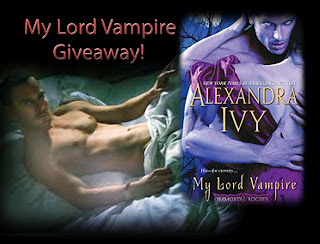 Just click picture and it will take you to the giveaway!
*Part of the AAD 2012 Reading Challenge*