On Saturday 3/31 I attended the JR Ward signing in Cinci, I showed up 4 and half hours early to get a good spot and there was already at least 450 people there. By the time 12:30 rolled around the numbers had more than doubled reaching 1,000 people, all crammed into Barnes and Nobles. Since the turn out was so huge Ward showed up early and started signing by 12:45. 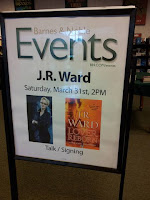 During the Chat Ward talked a lot about Lover Reborn and What's to come. The biggest news being Blay and Qhuinn being the next BDB book! There is no title as of yet and no release day but it will be in 2013. Some Q's that were asked during the chat;


*1,000 people crammed in this little area and I hear one women went into Labor!* 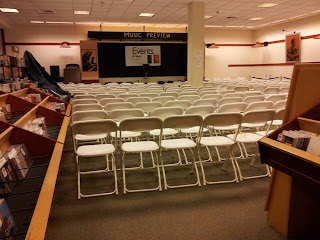 Q) Will Lassiter get his own book?
A) Yes but she isn't sure if it will be a BDB book or part of The Fallen Angels series.


Q)Will Saxton get his HEA?
A)The room went very quiet when this question was asked and Ward looked down and said no comment at this time. There was an uproar at this! Had me thinking something bad was in the works for Saxton.


Q)Where's Muhrder?
A) He will be making a come back but not sure if it will be Qhuinn/ Blay's book or not.


Q) Why was there no mention of the bonding scent in Tohr's book?
A) Since Tohr has bonded once already with Wellsie he can not have that scent with any other. It died with Wellsie. But Tohr can still have a happy and full relationship with someone else.


Q)Will there be graphic novels of BDB?
A)There is nothing in the works and no plans to but it would be up to the publisher.


Q)Will there be a three way with Blay/Qhuinn/ Layla?
A)Hell effin no! The fans would be breaking down her door!


Q)Will there be books for Trez and iAM?
A) yes and there could be some controversy over who Trez ends up with. 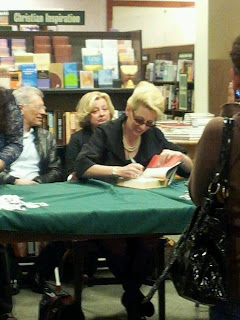 Q)Any Novellas?
A) Rhage and Mary's is almost finished and there will be a Wrath and Beth one as well.

*Ward is nervous about writing Blay/Qhuinn's book because of the high expectations. It will be a very emotional beginning and change the BDB world. There will be lots of sex in the next book and we might even see an appearance of Z. Can't wait for that one. Love Z! Lover Eternal will be released in Hardback November 6th  2012.
Look for a signed Lover Reborn Giveaway to post soon!