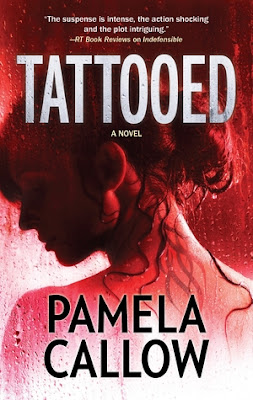 "Hell is empty, And all the Devils are here." William Shakespeare

Blurp from Goodreads;
When a body is found on the outskirts of Halifax, rumors run wild about the victim's identity. But tattoo artist Kenzie Sloane knows exactly who she is. They share a tattoo... and a decade-old secret.
Lawyer Kate Lange remembers Kenzie Sloane. The former wild child was part of the same crowd that attracted her little sister, Imogen, before her death. Now Kenzie needs her help. And Kate needs answers.

But there are others who know about the tattoo and its history. And one of them is watching Kenzie's every move, waiting for the perfect moment to fulfill a dark promise that had been inked in her skin.

First off the cover is ok but when a cover doesn't really fit with the story it bothers me. One of the main Character Kenzie Sloane is a tattoo artist and is covered with tattoos, I think that should be reflected in the cover.


The story starts off with John McNally being released from Prison. He's been in prison for 17 years for Manslaughter and upon his release his mind wanders to the love of his life, Kenzie Sloane as well as his hate for Kate Lange. He plans to take Kenzie back as his own whether she is with someone new or not and to get revenge on Kate for ruining his plan years ago. Back when Kenzie and McNally were teens they played a game with an old revolver and had plans to kill Kate's sister Imogen until Kate killed her in a car crash. Now that McNally is free he's going to put Kate in Imogen's place and hope it bring him and Kenzie back together like old times.

Kate Lange is now a Lawyer and is starting a new case, trying to help her client Frances Sloane, which is Kenzies Mother, with assisted suicide. Frances has ALS and is suffering a slow painful death. Kate has issues with helping Frances because she has a past with Kenzie but she tries to be professional and put her issues on the back burner.

Kenzie Sloane has become an icon in the Tattoo world, traveling all over the world but when she hears about her Mother she goes back to her home town of Halifax to not only face her Mother whom she hasn't had a good relationship with but to face her Demons.

This book is quite the whirlwind, jumping from one character to another but it has a great story line and suspense that will have you not wanting to put the book down. All the characters have secrets and there own personal goals and I liked the way they all played out.

I suggest reading the series in order.

Damaged and indefensible are the first and second book in the Kate Lange Thriller Series and you can find more info here;