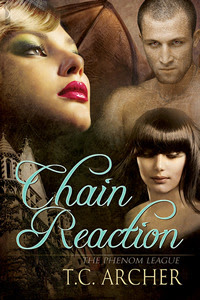 Blurp from Authors Website:
What really went on inside the Manhattan Project during World War II? The University of Chicago was where scientists observed the first nuclear chain reaction. And where the Nazis sent their most dangerous spy.

When a spy is detected, and a scientist is tortured and murdered inside the university, former Chicago police detective Jordan Pierce is put in charge of the investigation. But Pierce faces two problems; he can't function during midday, and he’s falling in love with the prime suspect. Pierce is thrust into the most dangerous and alluring assignment of his life, and comes face-to-face with his lost humanity.

Many unsung heroes helped win this war, but few made a bigger impact and remained cloaked in more secrecy than Jordan Pierce. Chain Reaction is one of the many untold stories that changed the course of the war.

Chain Reaction takes place in 1942 during WW2 where John Pierce is head of  night shift security for the US Government to help protect the Manhattan Project in Chicago but he wasn't always a security guard. Eight months prior John Pierce was a Detective in Chicago and found himself attacked in an alley, he hasn't been right ever since. He thinks he's been infected with something, he no longer has a need for food and drink, smoking addiction is gone and by midday a bizarre sleep overtakes him. The only thing he can think to do is take another job that's lower profile and hope to find the person who attacked him and get answers.  His main concern now being someone finding out about him and wanting to experiment on him.
When showing up for his shift he finds out there has been a security breach and one of the Scientist working on the project has met an untimely death. Pierce is put in charge of the investigation but is having issues with the main suspect Scientist Gladys Nichols. Pierce feels an undeniable sexual connection to Gladys but he also feels she's a spy for the Germans. Will Pierce be able to overcome his infatuation with Gladys and not turn his back on his Country or will the fear of his co workers finding out about his infection stand in the way?
I thought this was a very good mix of Paranormal and History. There is tons of action and when Pierce's imagination takes off with images of Gladys it will have your toes curling! Through out the book there are references to actual events that happened in History which make for an interesting read and I love that the book is dedicated to the Men and Women whom fought for our Country. There's a lot of times and people who take them for granted and I don't think they get the gratitude that is owed to them. If you love to read Paranormal and History your going to love this book!