Review: When a Dragon Lusts a Woman 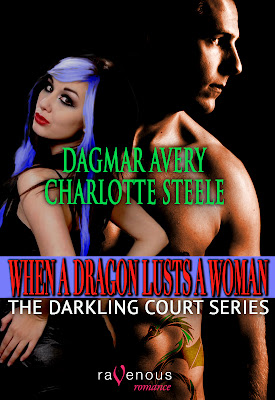 Looking forward to the nuptials of her best friend and charge Prince Declan, Sorcha Ilisse knows what’s in store for her: Sex, sex and more sex. The ability to see some favorite lovers and indulge in the debaucheries of the event riding high on her senses, she didn’t count on the one person she didn’t want to see in attendance.
Jaerik, a green Dragon and general of the Dark fae was snubbed by Sorcha once upon a time, but years have past and he never forgot the burning obsession that was her lithe little body gracing his bed for always. She spurned him when he was a young Dragon but now a man, he’s set to prove to her that he is exactly the kinda male she needs.
As the festivities open with an annual hunt, Jae sees his window to seduce and ensnare the one woman he could see himself with for always…
Book Excerpt:

“Will that be all, Prince Declan?”
He looked up from the paper on his desk and waved his attendant away. “Yes, Odo. Have the list sent out immediately. We leave in a week. I want all RSVP’s before we go.”
“Very good, sir,” the older fae said and took the ream of paper he had in his hands out of the room and shut the door.
Prince Declan Misari, now alone with his thoughts, went over his list once again and smirked to himself. Ah yes… forgot one…
He pulled his pen from its holder and started scribbling on the piece of parchment sitting before him. It was a short missive, but clear and concise, and sure to get his point across.

Attention Lord Jaerik,
Your presence is required at the wedding of Prince Declan and his princess Lydia Swinlow for festivities and revelry at the weeklong celebration at the Royal Misari Compound. This is not a request, but a command. Do well to follow it.

Yours in blood and Darkness,
Prince Declan

P.S. I’m not fucking about.

Declan read it over and laughed to himself. Jaerik, being a proud and fierce Dragon fae, would not be happy with the decree, but really, he would be happy with the result. Provided he still had the obsession that had driven him to become the connoisseur of women that he was now. That was a chance Declan would have to take though, seeing as it was the only way he knew of to pay Sorcha back for her meddling. She wasn’t going to like it, but there was nothing she could do about it once everything was set into motion.
He grabbed an envelope, slipped in the letter, then scrawled the address across the front and sealed it with his royal seal and wax. The Dragon would not be able to resist a personally sent letter, or, hopefully, the opportunity to reconnect with Sorcha now that he wasn’t the young Dragon he once was.
“Odo, could you come back in? I had forgotten something…” he said as he pressed the intercom button. “And this needs to be in the packet before you leave with it.”

* * * *
Jae swore as he heard the fanfare, the drum of a small gong and the tinkling of bells that heralded the appearance of a fae messenger, and rolled his eyes. Why does it always happen when you step into the shower? he wondered. Usually it was his mother with impeccable timing, but he was not so unlucky this time. The air smelled different, charged and happy, satisfied. It peaked his curiosity.
Turning off the water, he stepped out and wrapped a towel round his hips before running a second quickly over his damp hair. Exiting the room, he noticed that a thick cream envelope had appeared on his bed, the only sign anything or anyone Fae had been in his house.
Picking it up, he examined it closely. Noting the seal of the royal house of Misari, Jae grinned. He ripped it open to read Prince Declan’s missive. He’d heard about Declan’s impending wedding and had wondered if he may be invited, but either way he’d made plans to go. He had a plan in the form of Sorcha Ilisse. A prize worth winning, she had spurned him once, but not this time. Declan knew of their past, and it seemed was up to something.
He read over the invitation once more and shook his head. For once Jae was happy to see where the Prince’s machinations would lead him, because Declan had plans that he knew had to do with the lovely Sorcha. Plans that would further Jae’s as well.
He opened his safe and withdrew a silken rope, a set of silver cuffs, a collection of jewels and an ornamental Dragon dagger. All the ingredients of a total claiming, especially when a Fae like Sorcha was in the mix.
He dressed and packed quickly, knowing he had much to do now that the formal invitation had been given and he was expected to obey. He wasn’t working on his own time as a wedding crasher anymore, no. He was a Dragon and he loved to hunt, and Sorcha was the ultimate trophy.

Enter the world of the Fae and Dragons, where sex is as casual as sharing a cup of coffee and as naughty as your wildest dreams.

Declan is preparing the invitation to his and Lydia's wedding when he thinks of one last invite that needs to go out. Thanks to his Body Guard Sorcha he has met his soon to be Wife and would like nothing more than to now do a little meddling in her life. Declan thinks that by inviting Lord Jaerik it could possibly be the perfect match to her flame.
Jaerik has been after Sorcha since he was a young Dragon but Sorcha shot him down. Now that he has grown into a full grown Dragon and well experienced in the pleasure department Declan thinks Jae's time has come.

Sorcha plans to spend her free time while at court in every position possible and is anticipating the hunt where her next sexual encounter will hopefully rock her world. She's expecting Lord Tristan, a recurring partner and one of her favorite Fae, to find her and remind her why he's her favorite. When a masked man is hot on her trail she knows one thing, it's not Tristan but this masked Man sweeps her off her feet, literally!

If your a fan of Erotica this book is for you! The fae love their pleasure and take it wherever and by whomever they can get it. Dagmar Avery and Charlotte Steele have created a world full of steam and sexy beings that are not ashamed to take what they want and have the ability to bring you to your knees by the flick of a tongue.

Be prepared for a cold shower before your even finished with this book!

Quotes I liked:
"I am a Dragon. We like treasure and you are a jewel. I want to be fascinated by you,to play with you and polish you. It is in my nature."

"Sometimes what you conceal is as sexy as what you reveal, and you are fucking sexy."

This is book two in the Darkling Court Series. Book one is a short story called Antebellum and can be found in Masquerade Desire. BUY A COPY 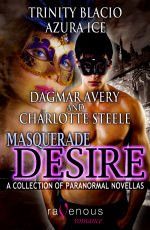 About the Authors
Two writers from very different worlds, Dagmar Avery and Charlotte Steele craft naughty stories about dark fae, true love and dragons. Friends for longer than they can remember, they started writing together to fill a need in each other’s lives--- the need to share their world with someone else. Dagmar lives in South Carolina with her husband and two dogs, and Charlotte lives in the UK as a sexy single woman on the prowl.


Want to know more about Dagmar Avery and Charlotte Steele? Check out their

Buy your copy today
BUY HERE
Who want to win a copy??!! The Authors are graciously offering a PDF copy to ONE Person, you must be over 18 to enter!