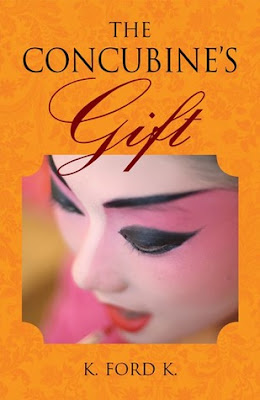 Blurp from Goodreads;
Bernice Babbitt, a sexually inhibited, thirty-nine-year-old woman, leads a peaceful life in the tiny resort town of Valentine, Nevada. Living only two miles from the famed bordello, The Honey Bunny Ranch, she can’t imagine what goes on behind its closed doors.
Things begin to change when Bernice buys an old, black-lacquer makeup case in an antique shop. The case once belonged to Blissful Night, the most famous and powerful concubine in Hong Kong. According to legend, Blissful Night could give a man more pleasure in one night than he would have experienced in an entire lifetime.
Inside the makeup case, Bernice discovers a forgotten jar of face powder, the secret to Blissful Night’s success. Thinking the face powder is an herbal concoction that will beautify her skin, Bernice begins to use it, only to find that the powder causes her to see visions of other people’s sex lives.
Bernice is horrified to discover that the only way she can rid herself of the visions is to blurt out sexual advice. Soon the entire town is in an uproar. But it isn’t until Bernice learns more about Blissful Night’s past that she knows what she must do.
The Concubine’s Gift is a delightfully sexy novel in which Bernice Babbitt is drawn into a seductive world she never knew existed. A provocative and entertaining Pandora’s Box of a tale!

Some believed Valentine, Nevada was built around 'The Crib' which was a Dance Hall with rooms upstairs for men to take a dancer up to for pleasure back in the early 1900's. With Prostitution legal in some areas in Nevada some thought this was no big deal but others were out to shut down the Brothels.

Bernice Babbitt was raised with very religious parents and was taught sex was not something a lady talks or reads about. Her Mother taught her that it was shameful. So of course with it being something to shun Bernice finds an interest in the prostitutes old belongings and starts to secretly purchase Erotica Female memorabilia from a local antique store. One day the Antique dealer, Mrs. Lin, said she had something special that would go wonderful with her collection, A makeup case that belong to a famous Concubine named Blissful Night's. Bernice was so excited to add such a beautiful piece to her collection even though the bottom drawer is stuck. Once she makes it home she finds a way to get the drawer open and what she finds inside delights her.
What she doesn't expect is to start having visions of other peoples sex lives, she is so embarrassed and ashamed. What makes it worse is she continues to have visions of the same people until she tells them what they needed to do to improve their relationship and sex life. Once she sees that it is really starting to help people and it was making them happier she feels less mortified until she has a vision of someone close to her. Bernice is desperate to figure out why she has these visions and how to get rid of them.


"As I always tell my customers, people must be very careful about the pieces they buy. The energy in an antique can change the fate of an entire household."

I found this to be a great book, it is very well written and you can visualize the small town of Valentine and feel the emotions that Bernice goes through. It's not a dirty Erotica book that will leave you blushing just from reading it, it is tastefully done and would be a wonderful introduction to the erotica world for someone new to the genre. I'm grateful to have been given the chance to review this book and hope you read it too! The ending will be bring a tear to your eye and make you smile at Bernice's conniving plan.

I'm so excited to have K. Ford K. on the blog today! She is going to share with us how she came up with the idea for The Concubine's Gift!

What if a timid, sexually-inhibited woman suddenly developed the psychic ability to see what everyone else needed to be blissfully happy in bed?  And what if she started blurting out sexual advice against her will?  That thought was the seed for my new novel, The Concubine’s Gift and the poor, long-suffering character of Bernice Babbitt was born.

I think many of us become a little shy when talking about sex in public so I wanted to create a loveable character who is absolutely mortified that she has to talk about sex.  After I had the main character and had researched the concubine trade in Hong Kong, I developed the idea of an antique makeup case that had, at one time, belonged to the most successful concubine in Hong Kong.  Inside the makeup case is a jar of face powder with magical properties, the secret to the concubine’s success.  When Bernice buys the case, it becomes her Pandora’s Box and her downfall!  I originally wanted to use a Japanese geisha since I lived twelve years in Japan but there was a lot more historical information about the concubines in Hong Kong so I decided to use that information instead.

At first, I couldn’t decide where to begin the novel.  But then I remembered an abandoned whorehouse in my hometown in Colorado and decided to use its colorful history.  When I was a child, we passed the locked up building all the time.  Then one day, dry rot caused the entire front of the building to fall off and into the dusty yard.  From then on it was open like a doll’s house.  Inside there was a stage with velvet curtains and on the floors above that, twenty tiny rooms with a rusted iron frame in each one.  I was fascinated by the whispered stories people told about the building in its heyday.  So I brought the abandoned whorehouse back to life and created a fictitious town for Bernice Babbitt called Valentine, Nevada (not too surprisingly, it looks just like my hometown) and started the novel there.

The reactions to The Concubine’s Gift have been very positive with readers laughing all the way through.  A few people have been shocked that I wrote such a sexy novel.  Luckily, most people seem to understand that The Concubine’s Gift is a very positive novel.  What I would like readers to gain is the idea that sex is a positive, happy part of a normal adult life.  The novel is also very non-judgmental towards sex.  What is healthy and fulfilling sex for one person may be very different for someone else, as Bernice Babbitt learns all too well!
K.Ford K. is generously offer 2 Ecopies of The Concubine's Gift, Just fill out the Rafflecopter form! Only mandatory entry is that your a blog follower all others are extra entries! Everyone is welcome to enter!

Find K.Ford K. at these location

Purchase your copy today at AMAZON

a Rafflecopter giveaway
Posted by bluesun1218 at 5:41 PM