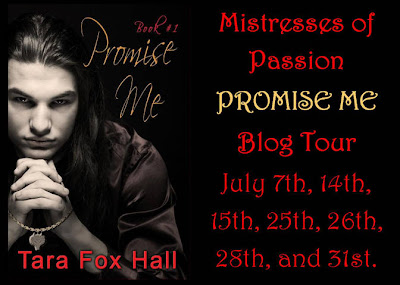 On this very hot day in July we have Tara Fox Hall who is the Author of Promise Me. Read on for an excerpt and review.

Long Blurb:
Metal shop worker Sarelle “Sar” McGarran is the ultimate tomboy and considers herself capable of handling whatever life throws her way. Recently widowed, she takes refuge in quiet country life until the day she stumbles upon an unconscious vampire on her property. Unable to leave the wounded man, she takes him in.
Danial Racklan is a sexy bad boy with a complicated past and questionable motives. Yet before long, he has Sar completely captivated. He introduces her to his secret, supernatural world, in the process reawakening emotions and desires she hasn’t felt since her husband’s tragic death. Soon Sar finds herself drawn into a dark, dangerous reality in which her desire for Danial is second only to her wariness that he may break her heart. Yet Sar must soon face there is much Danial has kept from her, even as she begins to love him. When Danial asks her for an Oath of forever, will Sar give Danial his greatest desire? 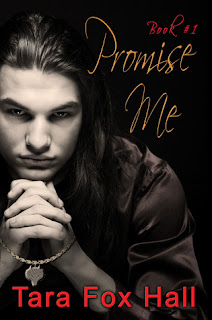 When your lover is a vampire, a promise of forever takes on a whole new meaning…

Danial was dying.
He could feel it in his blood, the burning in his flesh. He pulled the truck onto a side road and accelerated. His pursuer couldn’t be far behind. He glanced at his arm, at the small gash that was even now healing. It might be better for him if he opened it up again. He’d cleaned it the best he could, but it wasn’t like he’d had time to do more than pour water on it. It felt as though a razor had cut him and was working its way deeper into his flesh.
Had to be poison. And no run of the mill arsenic or derivative.
His mind worked frantically. What poison had been on the tip of that arrow? Who had that been in the shadows? Who’d known he’d been working on the Donaldson contract that he’d be there tonight, watching? And most importantly, who had dared attack him?
It was possible the attacker hadn’t known his name. But whoever had done this knew the breed of man he hunted and had prepared a special end for him. He’d gotten a glimpse in the shadows of what had hunted him; red eyes and a masculine form moving at supernatural speed. In his world, that still left a long list of possible suspects. For certain, it had been another of his kind.
He came to a crossroads and went west, then to another and headed south. There were no headlights behind him, at least so far. Best to leave the most complicated trail he could.
With some bitterness, he wondered why he was fighting so hard to survive. His life had been pointless for the last half century. Modern books and novels talked about how fun it was being a creature of the night; so romantic and glamorous. What a crock of shit.  If he hadn’t had his business, he’d have gone crazy. And as for there being so many women who wanted to be with . . . someone like him . . . for the most part, it was a phase girls in their twenties went through. Looking for a bad boy to titillate and seduce them.  Not one had been anything of substance. It never lasted very long. But the ones who wanted in for the long haul were worse. There was always the vow of doing anything for him and the promise of eternal devotion. Until they found out that he couldn’t give them what they wanted. Then it was wheedling and hints of what he would do if he really cared for them. He’d stayed away from any serious commitments lately, say the last thirty years. Why bother, when they were doomed to fail?
Enough of depressing thoughts! God, wasn’t death at the end of the night depressing enough? He smiled at that and checked the rearview mirror. Still no lights. His attacker was either a master tracker or an amateur.
Maybe his life wasn’t everything he’d hoped for when he was young. But he’d be damned if he’d give it up without a fight.
He felt a wave of nausea, and swallowed. If there was going to be a fight, it had better be quick. He could already feel himself getting lightheaded, and it was getting worse by the second. He had to pull in somewhere and get out of the open. The night was more than half over. He’d never make it to the campsite he’d planned on, not how he felt.
***
Terian paused, full of righteous triumph, a wide smile on his face. This was going perfectly. He’d hit his target, and it would all be over in a matter of hours. If he was lucky and had gotten the arrow deep enough, it might be only one hour. That poison was damn effective. Better yet, fate had done him a favor. The killer had been calling on his cell when he’d been hit, and in his shock and rush to get away, he’d dropped it.
Slowly, red eyes gleaming, Terian held the phone in a taloned hand and crushed it to pieces. No help coming tonight.
He still had to be careful. After all, he’d never done anything like this before. This was no time to get cocky. It wouldn’t be over until he’d either seen a body or a nice mound of ashes bathed in daylight.
Better get a move on. The night was already half over and his prey had a big head start.
***

Where the hell was he?
Danial looked around and saw only cornfields and wooded areas. Small houses were interspersed here and there, some with barns or paddocks. Livestock were in some of the pens; if only that would work tonight.
The muscles in his arm suddenly contracted. He swerved, barely missing a truck coming the other way. He overcorrected, sending his truck almost into the ditch. But then he saw a turnoff. At least, he hoped it was. His eyesight was going dim, and he knew his time had run out.
He swung the truck into the opening among the trees, evoking a loud clank from the front fender. Nothing like a metal chain to scratch paint, not to mention leave evidence of a trail. The road seemed little more than a path, and he maneuvered as best he could; but his strength was failing fast. He slumped over the wheel, and the car rolled to a stop.
He had to get to safety. At least, in the trees there’d be darkness and shadows, where he might be able to find shelter.
Exhausted, he pushed against the door, momentarily forgetting how to work it. He fell against the passenger side door, disengaging the lock, and opening the door. In slow motion, he fell, the ground rushing up to meet him.
The door, at an angle, remained open for a moment, illuminating his body in a pale glow. Then the door succumbed to gravity and swung slowly shut with a soft click, leaving the vehicle and Danial’s still body in darkness.

Right from the beginning your pulled into an action scene and it leaves you wondering about the main character Danial. Who's after him? What has he done for someone to try an kill him? Why your still wondering that you meet Sarelle. I couldn't help but wonder if I was in her shoes would I have helped an unconscious man I didn't know and brought him into my home without calling the police? Well if he looked like Danial it would be hard to resist! One of the great qualities Sarelle has is not being able to stop herself when someone or something needs help. She brings Danial into her home and does all she can to aid him. Not knowing anything about him but that changes fast as she discovers things about him while he's still unconscious. Even after learning about who he is she still helps him. Maybe it's the loneliness Sarelle has felt since her Husband died or just her loving heart but either way Sarelle starts to find that she enjoys spending time with Danial. As time goes on she realizes the dangers of being with a Vampire, his enemies are always looking for a way to get to him and what better way than his lover. Sarelle has a lot of hard choices to make, follow her heart in the face of danger or cut ties and run.
I really enjoyed the world Tara Fox Hall has created, lots of action, passion, the secondary characters were great and I love how the plot thickens and twists. I recommend this book to all vampire lovers out there! 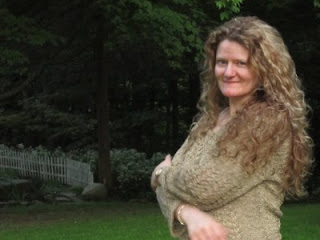