Review and Excerpt: Once Burned By Jeaniene Frost 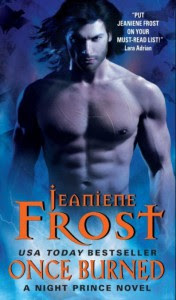 She's a mortal with dark powers...
After a tragic accident scarred her body and destroyed her dreams, Leila never imagined that the worst was still to come: terrifying powers that let her channel electricity and learn a person's darkest secrets through a single touch. Leila is doomed to a life of solitude...until creatures of the night kidnap her, forcing her to reach out with a telepathic distress call to the world's most infamous vampire...

He's the Prince of Night...

Vlad Tepesh inspired the greatest vampire legend of all—but whatever you do, don't call him Dracula. Vlad's ability to control fire makes him one of the most feared vampires in existence, but his enemies have found a new weapon against him—a beautiful mortal with powers to match his own. When Vlad and Leila meet, however, passion ignites between them, threatening to consume them both. It will take everything that they are to stop an enemy intent on bringing them down in flames.

Being a huge fan of the Night Huntress series I couldn't wait to read Vlad's story! I loved his personality and snarky comments from previous times he'd made an appearance.  I try to not go into a new book with high expectations but really that's hard to do when it comes to Jeaniene Frost, right!?
I was suprised that the book was narrated by Leila instead of Vlad but it didn't ruin it for me.
Leila is a women with "special abilities" meaning she cannot touch someone without sending an electric volt through their body and it can be so strong it kills but that isn't all, if she touches anything or anyone with her right hand she can see their worst sin. The only lifestyle she finds that works for her is working in the Carnival were her partner is a vampire. Vampires are not immune to her electric charge but can handle it in small doses. She has come to care for her partner Marty and looks to him like a father figure. After practicing their act Marty retires to his trailer and some unexpected vampire guests confront Leila,  They know of her abilities and kidnap her hoping that Leila can lead them to their enemy. That enemy just happens to be Vlad, but will Vlad kill Leila for leading his enemies to him or save her from her kidnappers?
Frost takes us on a wild adventure in this book. I loved how the climax built leaving you wondering what was going to happen next and then completely taking a turn a leaving you thinking what the hell! Secondary character were intense in this book as well, Maximus which is Vlad's right hand man takes a liking to Leila and with Vlad being his arrogant self gives Maximus permission to pursue Leila because Leila is in denial about her attraction to him and he knows she will eventually come to him on her own. I hope to see more of Maximus, he intrigues me and the way the books ends makes me feel there could be some unresolved feeling with him towards Leila.

The word “house” didn’t begin to do justice to the white and gray structure in front of me. I actually had to tilt my head back to see all the way up to the roof. It was at least four stories high, with additional floors on the triangular turrets that rose dramatically on each corner. A myriad of carvings decorated the exterior, from intricate balconies in front of soaring windows to stone gargoyles that glared down from their perches. They weren’t the only sentinels of this gothic-looking palace; at least a dozen people were stationed in various spots around the house, some standing so still that at first glance, I’d thought they were statues, too. A high stone wall with manned lookout towers encircled the property. Beyond that and the surrounding forest, dark gray mountains acted as a natural barrier, adding to the imposing feel of the place.
“Leila.”
Vlad’s voice jerked my attention back to him. He didn’t bother to hide his grin as he glanced down at my feet.
“Don’t you want to come inside before you catch a chill?”
I followed his gaze as if I needed proof that I was standing barefoot on the icy ground. I’d forgotten about the cold, being so caught up in the splendor around me, but now sharp needles of pain pricked my feet.
“Coming,” I said at once.
Two huge double doors opened and Vlad entered through them, nodding at the men who bowed to him as he passed. This time, the obsequious gesture didn’t seem out of place. Anyone who lived in a palace like this would expect to be bowed to. Hell, it was bigger than some royal castles I’d seen on TV.
I followed after him, unable to keep from looking around like a kid. We were inside an enormous hall with ceilings that were decorated with artful beams, frescos and shields. Off to the right, the ceiling lowered and became domed glass. Below it, an indoor garden with plants and flowers were arranged around chairs, couches, and a marble fountain.
Vlad strode by the garden and I followed, catching glimpses of more magnificent rooms as we continued down the main hall. Finally he stopped in front of a staircase.
“Maximus will show you to your room,” Vlad stated. He turned and began to walk away, but my “Wait!” stopped him.
“I can’t shower until I release all my excess electricity,” I said with a shrug. “Don’t suppose you have any lightning rods here?”
“I’ll get some,” he replied, coming closer. “Until then, use me.”
“I can find something else,” I hedged.
A brow arched. “I insist.”
He grasped my hand with those words. His coppery eyes stared into mine, silencing my next protest before I voiced it. He was so close that I imagined I could feel his unusual heat in the scant space between us. The warmth from his hand was certainly real. It seemed to slip inside my skin, teasing me with memories of what it felt like to be enveloped in his embrace, that hot, hard body pressed along every inch of me.
I cleared my throat to distract myself from the unexpected tightening of certain parts down below. It didn’t help that he stroked my skin as he waited for my response, even that small touch sending more pleasant tingles through me.
“Are you sure?” I had to drain myself in order for this to be effective, and though he was fireproof, it might still hurt.
He leaned down, his long hair brushing my face. Those dark strands shouldn’t have felt like teasing caresses, but they did, and again, I cursed my strange reaction to him.
“I never do anything unless I’m sure.”
His voice was lower, and his fingers tightened on my hand. A bolt slid into him that I hadn’t meant to send, but he didn’t appear to mind. Instead, a slow smile spread across his lips.
“More.”