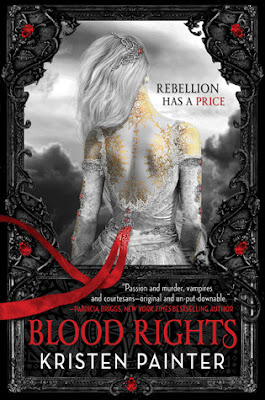 Rebellion has a price.

The lacy gold mapped her entire body. A finely wrought filigree of stars, vines, flowers, butterflies, ancient symbols and words ran from her feet, up her legs, over her narrow waist, spanned her chest and finished down her arms to the tips of her fingers.

Born into a life of secrets and service, Chrysabelle's body bears the telltale marks of a comarré—a special race of humans bred to feed vampire nobility. When her patron is murdered, she becomes the prime suspect, which sends her running into the mortal world...and into the arms of Malkolm, an outcast vampire cursed to kill every being from whom he drinks.

Now, Chrysabelle and Malkolm must work together to stop a plot to merge the mortal and supernatural worlds. If they fail, a chaos unlike anything anyone has ever seen will threaten to reign.

Chrysabelle is a Comarre’ that is on the run. A Comarre’ is a Hybrid Species that’s body over produces Blood which makes them perfect for the Vampire society, but they are only for the Noble Vampires. Her Patron Algernon has been Murdered and some of the other Noble Vampires think she’s the prime suspect. She is relying on her Aunt Maris whom is a freed Comarre’ to help her prove her innocents and live as a free Woman. She ends up at a Bar called Puncture in hopes of finding a man that her Aunt has told her could help but just her luck he hasn’t been seen for a few nights. Trying to adjust to the Kine or Human World is not easy since all Chrysabelle has known is the Vampire World.
Malkolm is a Vampire that lives is solitude and is haunted by the kills he's made in the past thanks to a curse that was put on him years ago. He's a very unstable being but just might be the only person that can help Chrysabelle obtain her freedom. The dynamic between the two main characters is kind of push pull which I enjoyed. I like to see them overcome their stubborn side and let fate have it's way. This book is full of supernatural being like Shifters, Faeries, Ghost, Vamps and some I've never heard of before! I recommend this book for all Paranormal Lovers. Fast paced, new twist to Vampires that I haven't read before, and the relationship between Chrysabelle and Malkolm will leave you running for the next book in the series!

*Part of the AAD Reading Challenge*