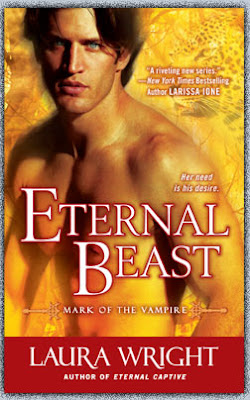 A Taste of Blood
Ever since his abduction by the Eternal Order of Vampires, Gray Donohue has finally found his true calling: vengeance. He will stop at nothing to bring his fellow Impure vampires the freedom they deserve. Now if he could just release his primal need for the beautiful vampire who saved his life—and rules his thoughts and desires…

After nearly killing the senator she was assigned to protect, Dillon is now in mortal danger. The jaguar within her has been unleashed, and she can no longer control it. Sex is the only thing that can tame her shift. And Gray is the only man who can make her surrender to a passion strong enough to overpower her inner beast. But she doesn’t want to surrender—she wants her life back. Because she is determined never to belong to anyone, especially not Gray—the male whom destiny claims is her mate…

Eternal Beast is book 4 in the Mark of The Vampire series, the reading order is as follow;

Also on August 7th join in on the Twitter party where you can win great prizes and even a chance to name a character in the next MOTV novel! Head over and pre register NOW! 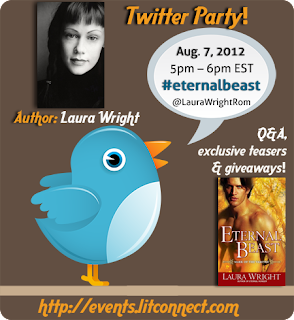