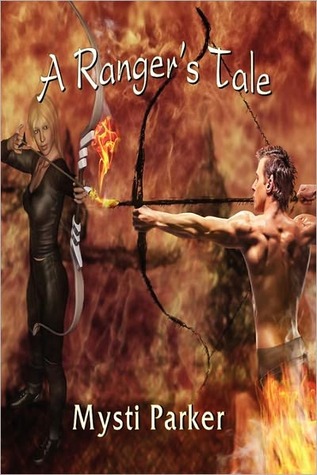 In the fantasy world of Tallenmere, an elven noblewoman longed to leave her gilded cage. A half-breed former pirate wanted nothing more than to escape his guilty past. Easier said than done...

High elf Caliphany Aranea leads an enviable life as King Leopold's niece and daughter of Sirius, Leogard's most famous wizard. Yet, being forced to follow in her father's footsteps and being betrothed to a man she doesn't even like makes her want a taste of life outside the city walls.

As a young boy, half-elf Galadin Trudeaux witnessed his parents' death at the hands of pirates. After being raised by those same murderers and forced to do their bidding, he escaped and now lives an honest life as a sea merchant and ranger.

When two brutes at Leogard Harbor attempt to kidnap Caliphany while she dreams of faraway lands, Galadin comes to her rescue. Impressed by his skills, she asks him to train her as a ranger. Though he is hesitant at first to train a woman of her class, Caliphany's hefty sack of gold finally persuades him. Unfortunately, her father is not amused, and the two must escape before Caliphany faces a forced marriage and Galadin faces a noose.

From that moment on she and Galadin embark on an adventure of a lifetime. Only if they can survive the trials ahead, will they find a love that stands the test of time.

I must say if I wouldn't have gotten a request to review this book I probably wouldn't have picked it up. Magic and fantasy isn't my go to genre. I was so pleasantly surprised by how fantastic this book was and so glad that I got to read it!
Caliphany is a high Elf that has always longed for far off destinations but is forced to stay in Leogard. Her Father has high hopes for her to follow in his footsteps and become a great Wizard and take over at the Mage Academy. That is the last thing she wants to do, but being the only child left alive there is no room for argument no matter what she wants.
In this royal society Caliphany has been promised to a man named ????? She is not happy about this. She longs for freedom to choose her life mate. I can completley understand that! Can you image how it would be to have your Husband selected for you when you were a child? Yikes!
While walking along the pier Caliphany runs into a bit of trouble with some sailors. They don't know who she is, niece of the King. She is pleaseantly surprised when a breathtaking man comes to her rescue.
Galadin has had a very turbulent life. As a young boy he witnessed his parents being murdered by pirates and those pirates took him, raised him and taught him all about sailing the seas.He is a half breed, part elf and part Human. He has made many enemies over the years but turned his life around and now runs a business much like the one his Father use to have and he is also a Ranger.
When Cali and Galadin meet you can feel an instant connection. She is intrigued by him being a Ranger ans seeks out to have him secretly teach her archery. Their relationship grows and the attraction builds, when Cali's Father finds out all hell breaks loose and she is locked away. It doesn't last long though because she excapts and finds herself stowed away on Galadin's ship with a search crew out looking for her.
This book was really good, it kept my attention from the very beginning. Full of adventure, love lost and gained and twist and turns that will keep you glued to this story. Can't wait to read the next bok in this series!

Cali’s locket was heavy on my neck as I stood at the wheel. I’d left many things behind in my life, but leaving her there alone was about the hardest thing I’d ever done. She was more than just a spoiled, rich girl. I’d seen it in her eyes when I met her—uncertainty and hopelessness, and when I trained her, she had lit up, like a wilted flower bursting to life. If anyone understood how she felt, it was me, and I’d not shown her the compassion she needed.
The sun dipped under the horizon. Shyler joined me at the helm. We had set off, the wind pushing us along, farther away from Faewood, farther from Cali. My body slumped over the wheel, and I pulled her locket out, rubbing it between my thumb and forefinger.
Shyler slapped a bony hand on my shoulder. He and Bob had sailed with my father all those years ago when they were still in their teens, and I was grateful they had agreed to join me when I started his business again. They had aged considerably, and I owed them a comfortable life at sea, not a frenzied life on the run with a noble woman I’d foolishly fallen in love with.
I looked down at Shyler and smiled. He smiled back at me. His spindly fingers squeezed my shoulder. “Tis a good night to sail.”
“Mm-hmm,” I agreed.
“I’ve known ya a long time, Cap’n. You’re about a decent a man as I know, like yer father was.”
A lump settled in my throat, and I stared out at the darkening sea. “Sometimes I wonder if he’d be disappointed in me.”
Shyler shook his head, his sun-bleached hair swishing above his ears. His hunched shoulders sagged even further. “He’d not be disappointed with ya, not for what happened back then. There weren’t a thing you could do about that. If I remember your father correctly, I’d say he’d be right proud, except for one thing.”
I raised an eyebrow. “What’s that?”
His squinty eyes met mine. “That you didn’t follow yer heart and go after the woman ya love.”
“But, I can’t just—”
Shyler grabbed the wheel and nudged me out of the way. “Time’s wastin, Cap’n. She might get ate up if ya don’t hurry.”
I stared back at the shoreline. Not quite a half-mile yet. I took off my boots and grabbed a waterproof leather sack, one of many we kept nearby on hooks, in case we had to abandon ship. The boots went in the sack, along with my dagger and a good bit of gold. I cinched it tight and tied it on my belt.
When I reached the railing, I yelled over my shoulder, “Send Razor to shore. Head to Arkis. I’ll get word to you there.”
Bob joined Shyler as I climbed atop the rail. They both saluted me.
Bob yelled, “Aye, Cap’n! Go get ‘er!”
I saluted, then dove in. The water was fine.