After Dark is so excited to be taking part in the Eternal Hope blog tour and scavenger hunt (Nov. 28th) for the release of the second book in the Hope series. Book 1 review- Sovereign Hope. 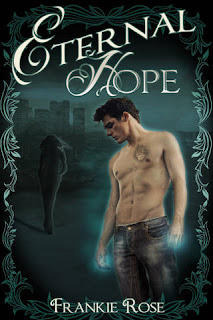 When your friends go missing and you don’t know if they’re dead or alive
when you tie your soul to the one you love
when you kill to protect and your family suffers,
there’s only one thing you can do....Move to Montana.

Farley Hope is special. She was prophesied to kill the forebears of her bloodline- a race of cold-blooded Reavers, men who steal the souls of the living to gain power. The Quorum had counted on Farley ending her own life in the process, but when Kayden came to her aid and helped save both her and Daniel, he undid their plans. Now the Quorum are displeased, not only with Kayden, but with Farley and Daniel too. Though her father is now dead, Farley’s troubles with the Reavers are far from over. An ancient Immortal, trapped for a thousand years, wants Farley for himself, and he will stop at nothing to claim her.

With secrets that lead to anger and pain, that turn friendship to dust, the group must overcome the problems within their own circle before they have a hope of fighting off the powers that threaten their lives.

Frankie Rose once again delivers an action packed story that will have you flying through the pages of this book!
Eternal Hope starts off with a bang! Kayden is on the run from the Quorum but it is short lived. He is tortured to extreme measures to where death is a welcome sight but will he be so lucky to receive it? All the while Farley, Daniel, Tess and Oliver are gearing up for a trip to Montana hoping to get information about their missing friends, especially Agatha. They are heartbroken over the loss of their friends and Daniel thinks getting with some old friends will help them but once they arrive in Montana it causes more drama and heartache. Things Farley are not prepared for! She starts to question a lot of things in her life and relationship.
There are new characters introduced into this book. Some you will love and some you will love to hate *cough Anna cough* haha
Farley is still having her visions and they are getting worse. More intense and to the point where Daniel is worried for her safety. The relationship between Farley and Daniel has matured and Daniel's not so much the hard ass like we seen in book 1. Don't get me wrong he still kicks major ass we just see a different side of him in this book.
Farley's visions are showing her of a man that is after her and the gang is determined to keep her safe, even a group that at first wanted her dead are stepping up to give her protection. But the man in Farley's visions is very different from the man in real life.
This is a must read and if you haven't picked up the first book in the series SOVEREIGN HOPE grab your copy! Frankie Rose has a fast paced, action packed, drama filled story just waiting for you.