Review: Legacy of the Clockwork Key by Kristin Bailey 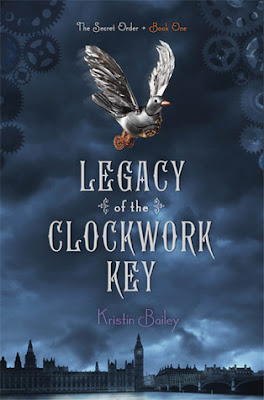 A teen girl unravels the mysteries of a secret society and their most dangerous invention in this adventure-swept romance set in Victorian London.

When a fire consumes Meg’s home, killing her parents and destroying both her fortune and her future, all she has left is the tarnished pocket watch she rescued from the ashes. But this is no ordinary timepiece. The clock turns out to be a mechanical key—a key that only Meg can use—that unlocks a series of deadly secrets and intricate clues that Meg is compelled to follow.

Meg has uncovered evidence of an elite secret society and a dangerous invention that some will stop at nothing to protect—and that Meg alone can destroy. Together with the handsome stable hand she barely knows but hopes she can trust, Meg is swept into a hidden world of deception, betrayal, and revenge. The clockwork key has unlocked her destiny in this captivating start to a trilogy.

I gotta say the cover of this book is fantastic! Very eye catching! This book is considered YA Steampunk. It does have elements of steampunk, a Victorian era feel taking place in England with a thrilling adventure full of inventions, secrets and murder. In my opinion a great read for the young adult world.
The main character Meg has recently been orphaned with the tragic death of her parents. All she has left is a pocket watch that she keeps around her neck.
As a young girl being raised in a society where status is important it's a huge blow to Meg to take on the job of a housemaid. She tries to be thankful that the Baron of the house was willing to take her in when she had nowhere else to go but the way the house is run is very unusual and even more unusual, no one has seen the baron whom lives at the house for years.
The pocket watch she wears is so important to her she decides she wants to get it fixed but the only person she knows of that might be able to help her is the Groom aka the Tinker that lives in the Carriage House. But she has been forbidden to ever go around him. The other housemaids saying he holds a candle to the Devil. The need for what she wants overriding her orders to stay away she sneaks to that Carriage House and what is discovered about the pocket watch is just the beginning of a thrilling adventure. The pocket watch takes her on a life changing journey through England, discovering things about her family she never knew about, and trying to do it all while staying one step ahead of a man trying to kill her.
I don't want to give too much away but this story is so packed with excitement you will find yourself finishing this book in no time. So many twist and turns, Meg putting her life in danger to get one more clue. I have heard this book being compared to a girl version of Sherlock Holmes and I have to completely agree with that. If you know a young reader I highly recommend this book and for adults too, I really enjoyed it. 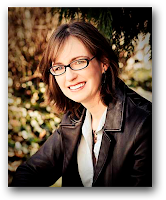 Kristin Bailey grew up in the middle of the San Joaquin Valley in California. As a kid she enjoyed visiting the beach, camping and skiing with her two brothers.

Now she is a military wife and mother of two young children. She is also terrible about spoiling her pets. She has one fluffy mutt, two cats who think they own the world, and a fish tank with some really plump little fish and a pair of snails who are secretly ninja assassins.

In the course of her adventures, she has worked as a zookeeper, balloon artist, and substitute teacher. Now she enjoys writing books for teens who enjoy mystery and adventure as much as she does.