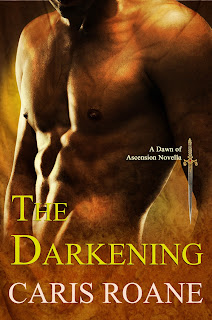 THE DARKENING, by Caris Roane
A novella of the Guardians of Ascension
49,800 words plus Ascension Terminology
A tortured warrior and a peace-loving counselor battle to protect Second Earth against a powerful dark force…

He thwarted connection of any kind…
Fearing that his newly emerged grayle power will kill innocent ascenders, Samuel Daman struggles to keep his distance from beautiful Vela Stillwell. But the breh-hedden has struck and her light floral scent tears at his restraint. When the enemy draws them both into the darkening, a place of secret travel for Third ascenders, will Samuel learn to control his power, or will he destroy what he desires most?
She hid from grief…
Vela Stillwell wanted a new life, away from Militia Headquarters, away from the reminder of all she’d lost when her husband died five years earlier. Seeking a more reclusive occupation, she finishes her last day of work only to have Samuel Daman and the infamous breh-hedden sweep through her life. Though trying to disconnect from her new emerging power and from Samuel, the call of the darkening pulls Vela into an adventure that both terrifies her, yet reveals the truth about her deepest desires. Will she succumb to the breh-hedden, or will her fears prevent her from living life to the fullest?

Purchase from:
AMAZON / BARNES & NOBLE
I dedicate this blog to BOOK HOARDERS everywhere! And thank you so much to ALL-THE-FUN-STARTS-AFTER-DARK for having me here today!
I write paranormal romance and LOVE it! I’ve always enjoyed sci-fi and fantasy, and even when I wrote my sweet Regency romance as Valerie King, I snuck in a vampire or two as well as characters from mythology! And that was way before the paranormal crazy. So, yeah, I’ve been dialed in to all things ghostly, and creepy, and fascinating for a looooong time!
I set my current Guardians of Ascension paranormal romance series – very epic series set in ascending dimensional earths and involving VAMPIRES – here in the Sonoran Desert where I live. I’ve been a resident of the Phoenix area for over two decades, though I grew up in California! The desert is a strange place to live, with thorny things both crawly and non-crawly, like cactus. You wouldn’t believe how many of our plants have thorns, but then desert living on any level isn’t for the faint of heart. We get blistering heat in the summer and you’ve probably heard that ridiculous saying about how ‘it’s dry heat’. Well, let me tell you that it may be ‘dry’ but you can’t send your kids out to play in that heat for half the year, at least not without life-support!
But because I live here, I set most of the action of my Guardians of Ascension here in the desert, which of course meant that I couldn’t have my hunky warriors walking around in leather pants. So, instead, I have them battle in smokin’ hot, leather kilts. You heard it right! And I’ve used the backdrop of many of our locales to frame the action, and the names are fabulous: Superstition Mountain, the White Tanks, Camelback Mountain, Carefree, and Queen Creek just to name a few!
My latest novella, THE DARKENING, is based on my Guardians of Ascension series. The story follows Vela Stillwell as she grapples with her newly emerged ‘darkening’ power, in which she’s able to travel between Second Earth and Third Earth through a ‘darkening grid’. These travels land her in a world of danger so it’s up to Warrior Samuel to protect her as she tracks down one of Samuel’s fellow warriors, Duncan, who’s been snagged by some really bad guys! And then, of course, the breh-hedden -- my own version of vampire-mate-bonding -- knocks this couple flat and it’s a roller-coaster ride as these two polarized ascenders try to stay away from each other!

The following excerpt comes from the first chapter of THE DARKENING in which we meet Vela for the first time.
Chapter One
Vela Stillwell sat straight up in bed and planted a palm between sweat-slickened breasts.
A nightmare that wasn’t a nightmare.
She set a stream of curses rippling the air and leaving behind tiny little fireworks--one of her more exalted powers that she kept hidden. Normally, the sparkling lights made her smile, but right now she was pissed as hell.
She didn’t want this, more power than she’d ever asked to have and a connection to another Militia Warrior.
She didn’t know the man in her dreams, but he had a darkness about him that both frightened her and left her feeling weak in a womanish way, like she wanted to be with him, wanted to be under him.
The vision, or whatever it was, had taken place in the desert and the warrior had been battling out at the Superstitions. He’d helped out a Warrior of the Blood, the super-sexy Santiago that had half the women at HQ racing to the workout center whenever it was known he would be running sword drills with the Thunder God Warriors.
Vela avoided the workout center.
The last thing she wanted was to hook up with another warrior. She’d loved and lost a man of the sword and she couldn’t go through it again. So, when the women at lunch got to talking about who looked particularly hot in a battle kilt these days, she’d usually make an excuse and head back to her desk early, on the opposite side of the building, where she worked crunching numbers, paying invoices, and reviewing purchase orders.
She’d been widowed five years now, but it still felt like yesterday since Jeff was killed in the line of duty, while battling death vampires at the Awatukee Borderland.
Waking up, therefore, with weird dreams about a warrior she didn’t know, but who appealed to her in an erotic, primal way, chapped her hide especially since today would be her last day at HQ.
She’d finally decided to leave the Apache Junction Two compound so she wouldn’t have to be around the whole Militia Warrior camp. She wanted a fresh start and next week she’d take up her new job as a counselor at the rehab center where she’d be working with Fiona, Warrior Jean-Pierre’s mated breh, helping to rehabilitate former blood slaves.
She checked her bedroom clock. It was already half past five. She got up and worked out for an hour, something she’d done since Jeff died. The exertion kept her sane.
She dressed in her usual dark slacks, light blue silk blouse, and low heels. She let her unruly, and very thick, long blond hair flow free, ignoring all the errant curls, letting the uncontrolled mass be a sign of the change to come, that after today she’d begin a new, less restricted life.
* * * * * * * * *
I hope you enjoyed this excerpt from THE DARKENING. To learn more about Warrior Samuel go to: http://www.carisroane.com/the-darkening/
* * * * * * * * *

BIO: Caris Roane has published nine paranormal novels and novellas and writing as Valerie King, fifty Regency works. In 2005, Romantic Times gave her a Career Achievement award in Regency Romance. As Caris Roane, she currently writes paranormal romance for St. Martin’s Press and also self-publishes the continuing stories for her Guardians of Ascension series as well as stories set in other worlds.
Website / Facebook / Twitter / Goodreads

THE DARKENING Tour
Giveaway Details
Caris is giving away an eBook of THE DARKENING at every tour stop.
(Feel free to host your giveaway however you feel comfortable. Please email your winners info to bookmonsterpromotions@gmail.com)
Caris Roane Grand Prize Giveaway:

One lucky winner will receive:
· A $10 e-Card to Amazon or Barnes & Noble
· a signed copy of ASCENSION
· an e-copy of THE DARKENING
· Caris Roane sticky notes, note cards, notepad, versatile calendar, RTC cards!!