Everyone give a huge welcome to Philippa Ballantine! She is our featured Author for Authors After Dark today. Philippa is a new Author to me and I am so intrigued with her Steampunk series Ministries of Peculiar Occurrences. 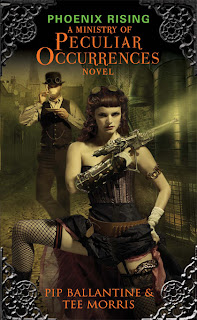 These are dark days indeed in Victoria’s England. Londoners are vanishing, then reappearing, washing up as corpses on the banks of the river Thames, drained of blood and bone. Yet the Ministry of Peculiar Occurrences- the Crown’s clandestine organisation whose baliwick is the strange and unsettling- will not allow its agents to investigate. Fearless and exceedingly lovely Eliza D Braun, however, with her bulletproof corset and a disturbing fondness  for dynamite, refuses to let the matter rest..and she’s prepared to drag her timorous new partner, Wellington Books along with her into the perilous fray.
For a malevolent brotherhood is operating in the deepening London shadows, intent upon the enslavement of all Britons. And Books and Braun- he with his encyclopedic brain and she with her remarkable devices- must get to the twisted roots of a most nefarious plot… or see England fall to the Phoenix. 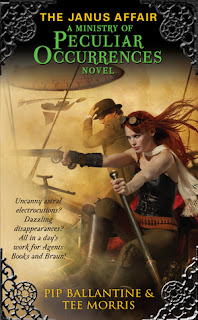 Evildoers beware Retribution is at hand, thanks to Britain's best-kept secret agents
Certainly no strangers to peculiar occurrences, agents Wellington Books and Eliza Braun are nonetheless stunned to observe a fellow passenger aboard Britain's latest hypersteam train suddenly vanish in a dazzling bolt of lightning. They soon discover this is not the only such disappearance . . . with each case going inexplicably unexamined by the Crown.

The fate of England is once again in the hands of an ingenious archivist paired with a beautiful, fearless lady of adventure. And though their foe be fiendishly clever, so then is Mr. Books . . . and Miss Braun still has a number of useful and unusual devices hidden beneath her petticoats. 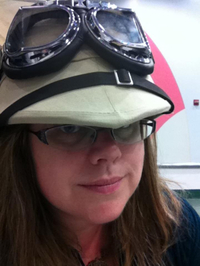 Born and raised in Wellington, New Zealand, Philippa is a writer and podcaster of fantasy fiction.
Immersed in books from an early age, she moved onto to become a librarian. She'd been dreaming of being a writer since a teenager, but in the last ten years she's devoted herself to it.
She's the author of the Books of the Order series from Ace Books. Geist, Spectyr, Wrayth (2012) and Harbinger (2013).
Also, with Pyr books the Shifted World series, Hunter and Fox (2012) and Born and Made (2013)
Philippa is also the co-author of the Ministry of Peculiar Occurrences series. Phoenix Rising and the Janus Affair (2012)
Philippa currently resides in Manassas, Virginia with her husband and co-writer Tee Morris, their daughter and a clowder of five cats who keep them all in line.
Website: www.pjballantine.com
Twitter: @philippajane
Facebook: Group page

* Do you have any rituals you do before you sit down to write?

I insist on having a cat nearby. They are required to help me feel comfortable...though our extra large male cat, Sebastian sometimes tries to crawl onto my lap. Since I write on a laptop that can cause problems!

Usually when a book first comes out I do read a bunch of reviews, but that turns into a little compulsive behavior and I have to make myself stop. I do have a google alerts just so I can find good reviews for my website though.

* Do you have a crazy fan story?

No, and I am grateful for that! I've had people be super excited to find out I am at a convention, and I've had people dress up as characters from my books. In those cases I am the super excited one. Writing is a lonely occupation for the most part, so discovering people have been reading your work is sometimes surprising.

As far as writing goes it is professional people who don't act professional. As far as life...I hate a cluttered countertop- that drives me batty!


*Are you attending any Conventions in the coming year?

This month I will be attending (along with my husband and co-writer Tee Morris) Up in the Aether, in Dearbon MI. We will both be at Authors After Dark in Savannah, and DragonCon in Atlanta.


*What are you working on now?

Right now, juggling! Edits for Dawn's Early Light, and working on book four in the series. Also preparing to launch Book four of the Books of the Order, Harbinger, and Book two of the Shifted World series, Kindred and Wings. Being an author these days means being not on a writer, but also your own publicity department.


*Do you ever get inspiration for a character from people you meet?

Absolutely! We sometimes put our friends in the Ministry books as agents, but in my fantasy work I draw from all my friends and family. They usually do not go in fully formed, but end up mashed up together in one character or another. I try not to threaten anyone with the possibility that they could end up in my books though!


*Out of your books do you have a favorite character or one that was really easy for you to write?

Eliza from the Ministry of Peculiar Occurrences is certainly the easiest to write, since she is like so many New Zealand women I knew and grew up with. I think she is a mixture of my grandmothers, and my good friend Cathy back home. She is so forthright about what she wants, and tells it like it is. Some of my other characters, like Sorcha from Geist, and Talyn from Hunter and Fox, are a lot more prickly and shadowy as to their motivations that sometimes I have a harder time poking the truth from them.

I read what I write; so steampunk, fantasy, sprinkled with some urban fantasy. I also love reading non-fiction books, particularly history. I'm a sucker for a good period drama...especially if it actually happened.


* I know some of us here at All the Fun Starts After Dark are guilty of this so I gotta ask, Have you ever bought a book because of its cover?

Yes! I think a good cover should draw a person in. Jason Chan, who does my covers for the Books of the Order, won a Chesley Award for his art for Geist, and people have told me they picked up and bought the book because of his art. It really is a seamless supposition in my mind, and I am sure with everyone else. When you see an artist has really produced a beautiful piece of cover art, you make the assumption that was is inside is just as good.

SEE YA IN SAVANNAH!